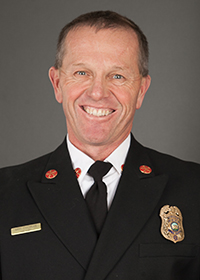 Reno Fire Chief Dave Cochran has more than 17 years of experience with the Reno Fire Department. Hired as a firefighter in April 1998, Cochran was promoted to the rank of Fire Equipment Operator in 2006, Captain in 2007 and Division Chief in 2012.

Cochran is a graduate from California Polytechnic State University in 1987, with a Bachelors of Business Administration Degree. He also graduated from the Hastings College of Law in 1990 with a Juris Doctorate.

Cochran has been a member of the Reno Fire Department Water Entry Team and is trained in Haz-Mat operations and response, Wildland Urban Interface Operations, and is an Advanced Emergency Medical Technician.  Dave was also the Interim Fire Marshal for the City of Reno Fire Department from October 2012 through July 2013.