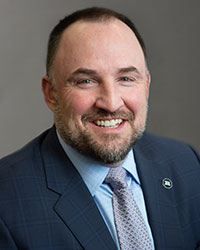 Outside of his Council position, Devon is a local attorney and primarily practices in the area of civil litigation.  Devon is proud to represent labor unions on the entire range of labor law matters before federal and state courts, arbitrators, and the National Labor Relations Board (NLRB).

Devon previously served as the Vice President and General Counsel for a large, regional construction company. He was also the former managing attorney of the Reno law firm, Curiale Dellaverson Hirshfeld & Kraemer, where he focused on products liability, wrongful death, and professional claims defense litigation.

Devon graduated in 1996 from the University of Missouri at Kansas City with a Bachelor of Arts degree. He received his law degree in 2000 from the University of Kansas School of Law. Devon is admitted to practice in the state courts of Nevada and is also admitted to practice in the U.S. District Court, the District of Nevada, as well as the U.S. Court of Appeals, Ninth Circuit. He was privileged to clerk for the Honorable Justice Cliff Young at the Nevada Supreme Court. Devon is also a member of the Washoe County Bar Association.

Devon was born and raised in the Reno area. He is an avid outdoorsman, enjoys travel, competitive tennis, and the arts. Devon and his husband are proud fathers of three amazing children. He enjoys volunteering his time with the McQueen Speech and Debate team and the Domestic Violence Resource Center.