Beginning in 2015, the Mayor and City Council passed a series of resolutions making climate action a priority for our community. The City of Reno joined the Global Covenant of Mayors for Climate & Energy, the largest international coalition of cities committed to taking voluntary action to combat climate change and move to a low-emission, resilient society. 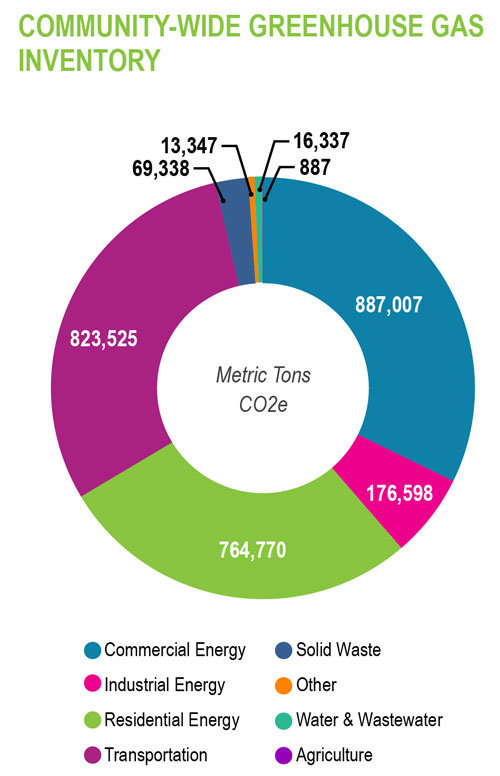 In 2014, the City of Reno partnered with Washoe County Health District, the Reno-Tahoe Airport Authority, and the University of Nevada, Reno to measure our community-wide greenhouse gas (GHG) emissions. The total GHG emissions for Reno were 2.75 million metric tons of CO2e (“carbon dioxide equivalent” measures greenhouse gases with a common unit). GHG emissions is also referred to as climate pollution.

The building sector generates 66% of total climate pollution with the commercial sector the highest generator at 32%, residential at 28% and industrial at 6%. Transportation contributes 30% of climate pollution, and because our community is an auto-dependent community, 83% of those emissions are from passenger vehicle use. Solid waste, water and wastewater, agriculture, and other sources collectively comprise the remaining 4% of climate pollution.

We found that the total emissions dropped significantly, down from just over 3.2 million metric tons in 2008 to 2.75 million metric tons. This translates to a 13.62% drop in total emissions in just six years. This fantastic progress is a sign of two things happening. First, it shows that the city and our community are taking action to reduce carbon pollution. The rise in popularity of fuel-efficient cars, rooftop solar panels, smart thermostats, and recycling have all contributed to the rapid drop in climate pollution.

Second, technology has become better at reducing the amount of energy needed to keep things running. The average passenger vehicle on the road in 2008 posted mileage of approximately 28 miles per gallon (mpg). In 2014, that average increased to 36 mpg. Today, the average has increased even more. Rising numbers of vehicles with improved fuel efficiency point us towards a cleaner future.

LED bulbs provide another simple example of what residents and businesses are doing. As more LED bulbs have entered the market, homes and business are switching to cleaner, more-efficient lighting. LED bulbs last longer and use a fraction of the energy required for traditional incandescent and fluorescent bulbs. Through our combined actions to lower climate pollution, together we are ensuring our future prosperity, as well as clean air and a healthy environment for our families. 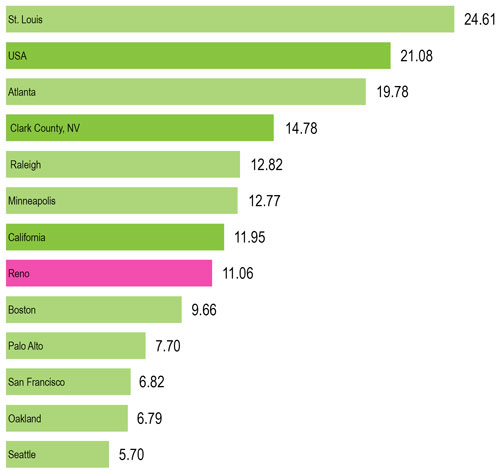 To better understand Reno’s GHG emissions, we compared our community against other community’s per capita emissions. Reno’s emissions are relatively low compared to the national average. One main reason is that Nevada's Energy Portfolio Standard requires that 25% of electricity sales come from renewable energy resources by 2025. In 2016, 21.6% of net electricity generation came from geothermal, solar, wind, biomass, and hydroelectric power sources.

More recently, the Mayor joined over 2,500 leaders from America’s city halls, state houses, boardrooms, businesses, and college campuses by signing the We Are Still In Declaration stating our commitment to meet the Paris Agreement in the absence of federal leadership. We Are Still In is a bipartisan initiative spanning all 50 states and representing over 130 million Americans and $6.2 trillion of the U.S. economy.

Reno has long seen itself as a pioneer city. In the beginning, Reno was a town built on mining and gaming. Today, Reno is building our clean energy economy. In the past decade alone, the city invested in energy efficiency and renewable energy projects that reduced municipal building energy use by 37%, providing cumulative savings of $3.4 million. These resources now can support other city priorities.

In August 2018, the Mayor and City Council initiated our newest effort to reduce carbon pollution by joining the U.S. Department of Energy’s Better Buildings Challenge, committing to reduce municipal building energy use an additional 20% by 2025 across 38 facilities and 1.7 million square feet. The city can’t achieve our climate goals alone, so the City of Reno launched an ambitious program, ReEnergize Reno, to improve the efficiency of commercial, industrial, and multifamily buildings 20% by 2025.

Recent blogs related to Climate & Energy are listed below. For more blogs posted by Reno Resilience visit Around the Arch and select Sustainability.

City of Reno's leaders honor Paris Agreement - We are still in