The City of Reno continues to rebound from the effects of the Great Recession. Property values are increasing, the population is growing, and Reno has been named one of the ten most livable mid-sized cities in the United States for 2014. While Reno’s economy for most of the 20th century was primarily centered on gaming and entertainment, it is now diversifying into a much broader base which spans healthcare, entrepreneurial startups, and technology-based industries. 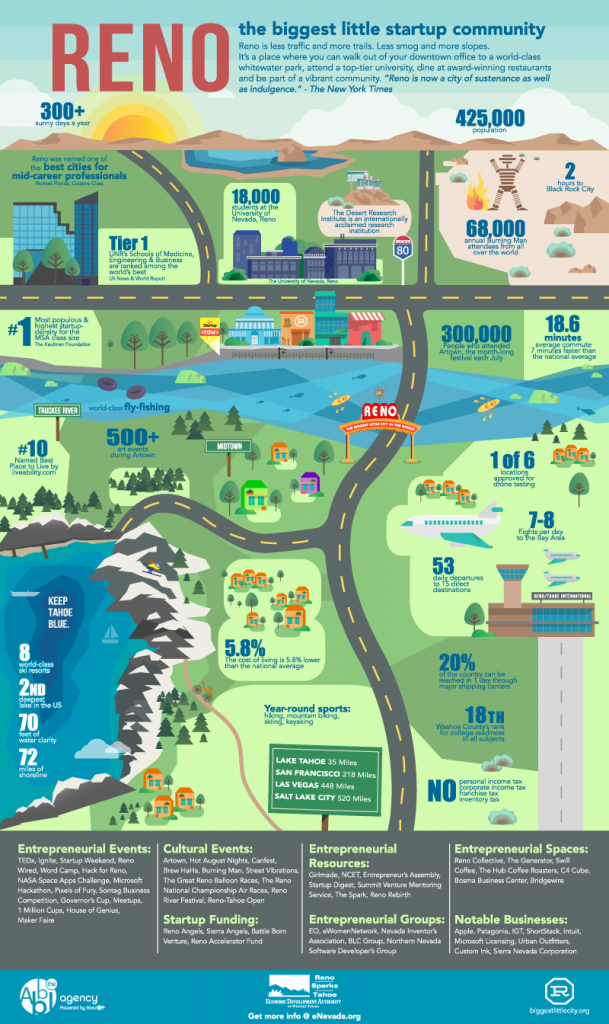 Reno has been nicknamed “The Biggest Little City in the World” and it’s true. Our unique quality of life contributes to the city’s economic vitality. Reno residents have access to first-class entertainment, dining, and recreational opportunities all within view of the snow-covered Sierra Nevada mountains which rise to the west. The Truckee River runs through the heart of downtown and Lake Tahoe is a mere 30 minutes away. Reno is home to outstanding institutions of higher learning, including the Tier 1 University of Nevada and the internationally-recognized Desert Research Institute; a Triple-A baseball park; an urban Whitewater Kayak Park; and a number of industrial giants, including Microsoft Licensing, International Gaming Technology, and Lincoln Electric. Every August, Reno is also a gateway to the Burning Man Festival, a week-long art event based on radical self expression and reliance in the Black Rock Desert.

Today, Reno is pioneering an economic future as one of the United States’ clean energy, technology, and entrepreneurial leaders. Our region is home to 13 geothermal companies and a number of advanced manufacturers. Reno was recently cited by the Kauffman Foundation as the country’s “most consistent standout” for startups. And with Nevada’s designation as one of six national test sites for Unmanned Aerial Systems, there is an emerging concentration of aviation, research-and-development, and high-tech industries.

Reno’s economy is principally based in the trade and service sector, with approximately 65% of the work force employed in these occupations. Although gaming and other recreational activities represent a significant portion of the growing economy and assessed valuation, the City is experiencing gradual diversification of its business base with the expansion of distribution, warehousing, and manufacturing facilities. Approximately 25% of the workforce is employed in the fields of construction, manufacturing, transportation, communications, public utilities, and finance related services.

The Reno area is serviced by two major highways. Union Pacific railroad and a number of trucking and airline carriers make it possible to ship from Reno to 80% of the 11 western states on a next-day basis.

Nevada has no corporate or personal income tax, and is a right-to-work state. These factors have contributed to the State’s tremendous growth in the 1990's and into the 2000's. In 2005, Inc. magazine named Reno No. 1 on its list of the "Best Places to Do Business in America," based on job growth figures among 274 metropolitan areas.

In addition to the accomplishments of the Economic Development Authority of Western Nevada in bringing new business to Northern Nevada, the City of Reno Economic & Redevelopment Agency has begun both entertainment and housing projects in the City’s downtown sector.