For Customers:
The Community Development Department is adjusting its processes and procedures in response to COVID-19. The changes allow business operations to continue for customers without requiring face-to-face interactions. Read this information for how these changes may impact you if you normally do business with the Community Development Department.

For Businesses:
Per the Nevada Health Response COVID-19 Risk Mitigation Initiative, all non-essential businesses have been ordered to temporarily close to the public until April 16, 2020. Read this guide for additional information on operational restrictions and mandatory closures for certain types of businesses. The latest information will be available at Reno.Gov/COVID19.

In an effort to provide relief for businesses affected by the COVID-19 business restrictions, the City of Reno is extending the time for businesses to pay their license fees. The deadline for any business license fees due between March 27, 2020 and April 30, 2020 may be extended 30 days. Any other business that has been unable to pay fees due to the COVID-19 state of emergency may request an extension on a case by case basis. If you have questions, please call 775-334-2090 or email businesslic@reno.gov. Due to high call volume, please leave a voicemail and a staff member will call you back as soon as possible.

The Community Development Department is responsible for the physical development of the City. The core service areas of the department include: housing and neighborhood development, planning, engineering, building and safety inspections, and business licensing.

We are now accepting electronic submittal of building permit applications and plans.

Following a year of work on several priority initiatives, the City of Reno is providing an update on the progress of nine programs and strategies meant to support the need for housing in the community.

In the summer of 2017, the Reno City Council prioritized a series of strategies that would address a variety of housing concerns. Collectively, these strategies have been referred to as the City of Reno housing puzzle. 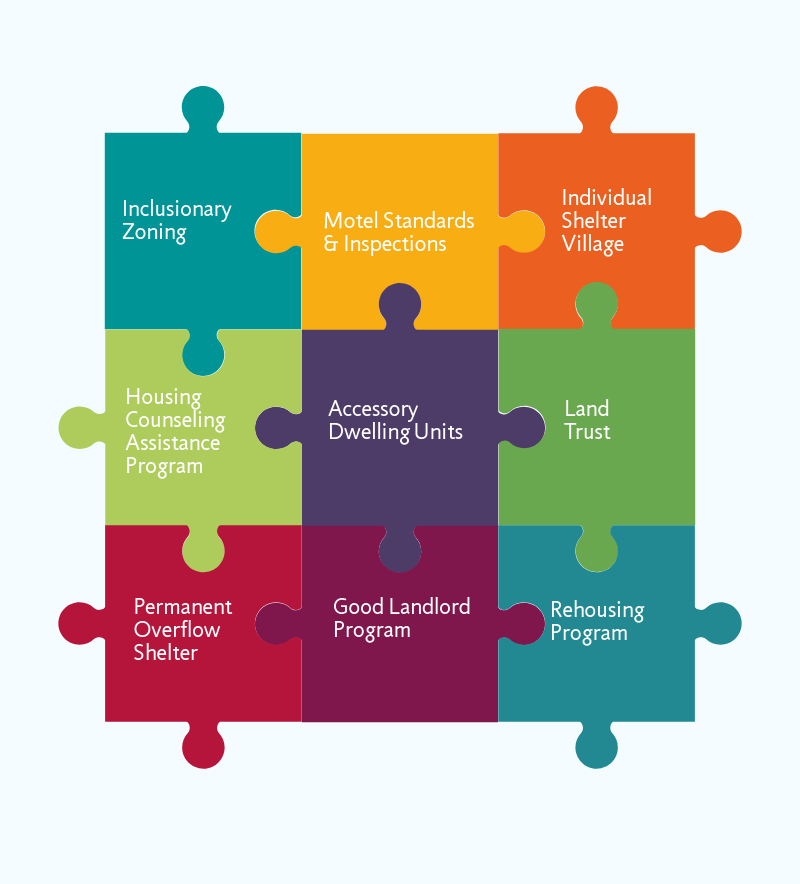 Over the past year, the City has worked on these initiatives alongside other housing and homeless programs already in place in Reno. In an effort to keep the community informed, updates as of October 2018 are provided below.

Inclusionary zoning policies typically support the creation of affordable units in new construction projects, which can be accomplished in numerous ways including requiring or incentivizing new residential development to include a certain percentage be affordable units for individuals in the low to moderate income range. The City of Reno worked with regional partners to identify this as topic for exploration in the Truckee Meadows Regional Strategy for Housing Affordability.

The City Council approved the Motel Inspection Program in August 2018. The program, which is scheduled to take effect in November, requires annual, proactive inspections of motel units; regular training for owners and property managers; and several other requirements. With more than 3,000 motel units in the city, the program is meant to support affordable housing options while ensuring the units are safe and properly maintained.

The City Council gave the go ahead for an individual shelter pilot project on a portion of the city-owned parcel at 250 Sage Street. The project will provide transitional housing to individuals. The City Council selected Northern Nevada HOPES as the operator of the project and donated up to $250,000 to support the project, called Hope Springs. The project is anticipated to have 30 individual housing units; a central facility that contains bathrooms, a kitchen, laundry, and a community space; and onsite case management and services.

In response to concerns raised by renters, the City is collaborating with Nevada Legal Services and Washoe Legal Services to connect residents with programs and services offered by the non-profits.

The proposed ordinance that would allow for accessory dwelling units (ADUs) within certain zoning districts and neighborhoods is making its way through the review process. Following a community outreach campaign to seek input on ADUs, the Reno Planning Commission analyzed the draft ordinance and has forwarded its recommendation to the City Council. The Council will consider the proposed amendment to Reno Municipal Code at a future date.

The Community Foundation of Western Nevada established the Community Housing Land Trust. The City of Reno has supported the organization’s affordable housing efforts in numerous ways:

In September 2018, the City Council directed staff to move forward with the creation of a good landlord program. The program incentivizes landlords and property managers of multi-family properties to keep them free of criminal activity, maintain properties free of code violations, and implement objectives taught in good landlord training courses. The next step in the process is asking for public input on the program as the draft ordinances are developed.

Although still in its conceptual phase, the idea behind a rehousing program is to help individuals who become displaced from their living situation move into other affordable locations. This program is still under discussion and development.
Return to full list >>