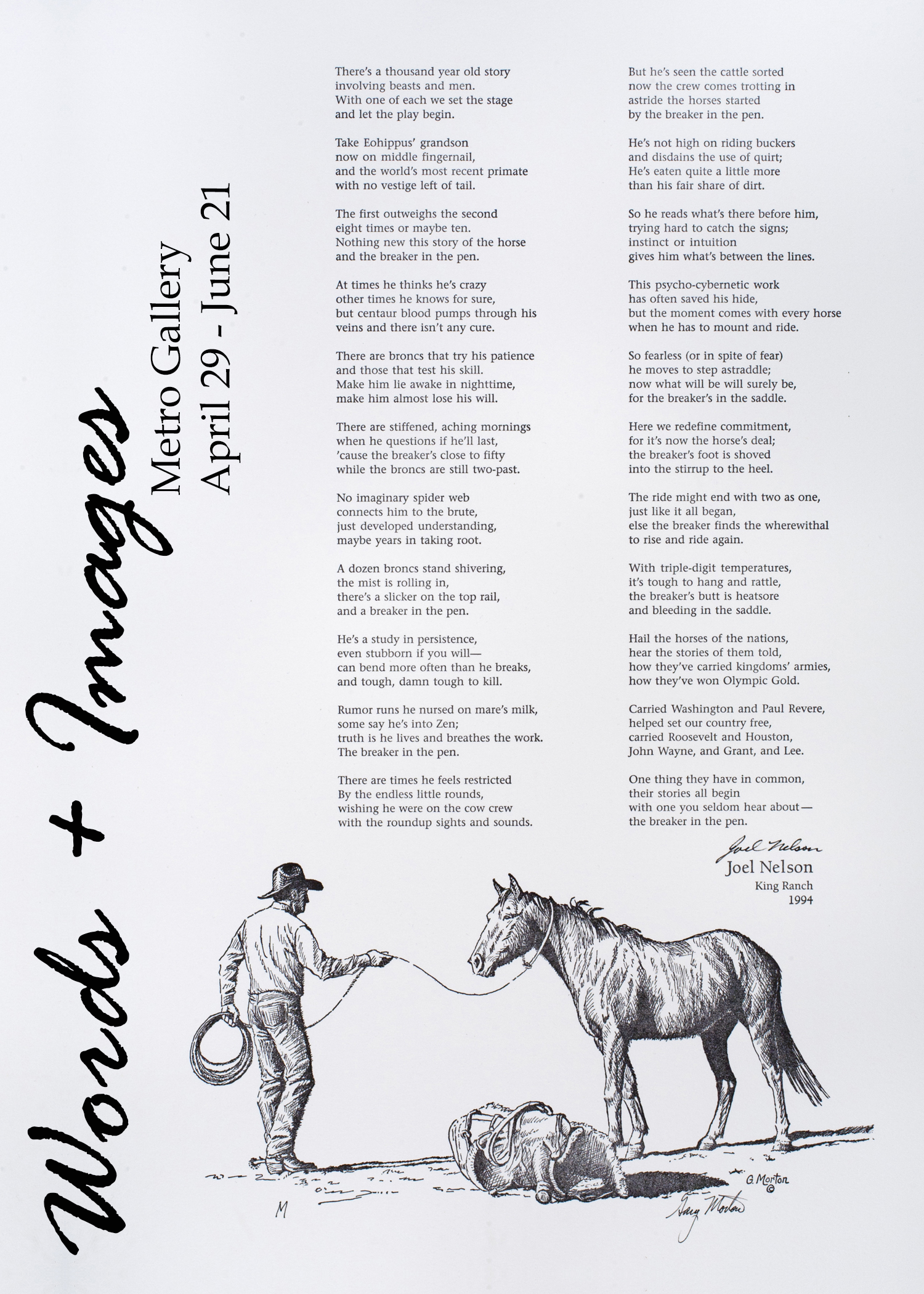 The City of Reno Metro Gallery presents “Words + Images: Broadsides from the Black Rock Press”, featuring 34 broadsides produced at the Black Rock Press at the University of Nevada, Reno using the letterpress process with handset type and relief plates. The printing was done on a Vandercook cylinder proofing press.

Since it was founded by Kenneth J. Carpenter more than forty years ago, the Press has been dedicated to the practice and teaching of the arts and crafts associated with the creation of finely printed books. The Press now has a national reputation for its outstanding work and has become a living museum of traditional printing technology, housing a variety of cabinets filled with metal type, and a number of historically significant printing presses. Its centerpiece, a gilded 1837 super-royal Columbian iron handpress, is one of the finest examples of a nineteenth century iron handpress to be found anywhere in the country.

Letterpress broadsides are created for numerous reasons, frequently to honor a visiting writer at a campus event. The Press has produced broadsides to honor university residencies by U.S. Poets Laureate Robert Pinsky and Billy Collins. Several broadsides were printed in conjunction with a national poetry broadside competition held in the 1990s; winning poets received cash awards and had their poems printed as broadsides. In recent years, broadsides have been produced for the Robert Laxalt Distinguished Writers Award, presented annually by the university’s Reynolds School of Journalism. Each broadside features a quotation from the writings of Robert Laxalt, one of Nevada’s finest writers. Most of the broadsides in this exhibit were designed and printed by Bob Blesse, director of the Press. Others have also contributed, including John Balkwill who was in residence as a book artist and printmaker at the Press during the mid-1990s. Former students assisted with the design, production, and illustration of the broadsides.

Curated by Bob Blesse with Gallery Notes essay by Harry Reese and organized by the Nevada Arts Council, “Words + Images: Broadsides from the Black Rock Press”, is part of the Nevada Touring Initiative–Traveling Exhibition Program. It was funded in part by the National Endowment for the Arts, the Nevada Humanities, and the Nevada State Legislature and an anonymous donor. The Nevada Arts Council is a division of the Department of Tourism and Cultural Affairs.